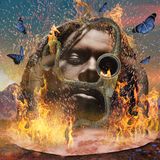 Regarded upon his 2006 arrival as a promising beatmaker looming in the shadows of J Dilla, Madlib, and Dabrye, Steven Ellison -- known as Flying Lotus -- nullified all comparisons only two years later with Los Angeles. On that album, his first of five for the Warp label, Ellison distilled a uniquely crisp, spasmodic, and heady sound with elements of hip-hop, avant-garde jazz, IDM, and dubstep. His sound continued to develop as he put his own twist on the approach, recording with a crop of jazz musicians including the indispensable likes of bassist Thundercat and strings master Miguel Atwood-Ferguson. Ellison devoted a few years to various forms of film work and the operation of his revered Brainfeeder label, and returned in 2019 with Flamagra, his second consecutive album to top Billboard's Dance/Electronic chart.