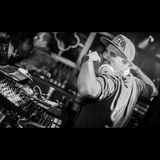 Following appearances at other Club Nights in the City, Feedo’s fan base grew tremendously and eventually gained the attention of international DJs – as well as R&B and hip-hop fans outside of the region – earning him gigs alongside some of the biggest names in the business, including DJ Qbert, Trevor Nelson and Akon.

DJ Feedo pretty much Is Hip Hop in Egypt.