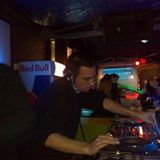 Fabio Triola was born in Rome in June 1983.
Since he was a child he had developed a strong interest in djing, also thanks to his brother's musical influence.
Following his own strong personality and his passion for music, very soon he started working in the best Italian clubs and not only...
For many years he has been dj resident at Fluid, a trendy club situated in the heart of the Capital. There Fabio can express his abilities without any restriction.
His sound cannot be placed in only one genre of music, since it is characterised by particular grooves and exciting rythms.
Listening to his sessions is a journey into the music....!!!!