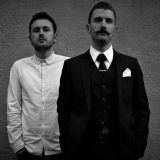 Never miss another
show from eskimotwins

Since meeting as students in Leeds, these two friends have shared their passion for music. The pair immersed themselves in the city’s clubbing and live music scenes and after discovering a mutual appreciation of Techno, Classic House, Indie, Acid and a lingering teenage love of Metal; they began making music together.

Early demos generated murmurs of approval amongst bloggers, clubbers, open-minded members of the indie glitterati and earned them a residency at the one of the UK’s most prominent club nights, Wax:On. Shows in the UK and Europe followed along with a couple of original EP’s and remixes which won them the support of fans and landed them a guest mix spot on Radio 1.

Summers spent darting back and forth between English festivals and Ibiza residencies were paired with winters spend in a dark South London studio full of old synths. Those long days helped tighten and focus their sound and resulted in a further run of original EP’s and a another host of remixes.