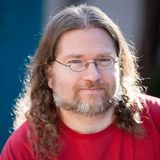 Never miss another
show from The Radiotrola Archives

The warehouse for the greatest Podcast to have ever been produced or ever will be produced in the history of humanity!
The Eric Paul Johnson Radiotrola Program ran from August 6, 2010-August 6, 2017. It was 30-60 minutes of attempted humor, although that humor was forced, and cringe-inducing early on.
Don't treat it as a Podcast. Think of it as a radio show without the restraints of the FCC.

WARNING: The first six-nine months of the show are awful. You can either suffer through those early shows, or just skip ahead.