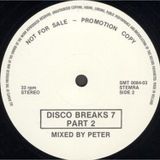 The name Hithouse is Peter's last name in English. Slag means Hit, Huis means House. So in English his name would be Peter Hithouse.

Peter Slaghuis was a meteor in the world of dance music in mid and late eighties.
Based in Holland, Slaghuis gets known in the world of underground djs for his fourteen albums of "Disco Breaks", and builds a credibility with a series of remixes, like Abba's "Lay all your love on me", Maria Vidal's "Body rock" and especially the million selling Nu Shooz hit "I can't wait", in 1986.

In 1984 he is also involved in dance act The Video Kids, releasing the single "Woodpeckers from space".

When the house music phenomenon reaches Europe, not only Slaghuis is one of the first dutch deejays to spin house (at the Bluetiek Inn in Rotterdam) but also one of the pioneers of sampling, with a couple of 1988/89 hits made under the name Hithouse. His first hit record is "Jack to the sound of the underground".