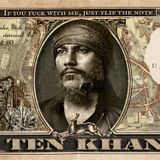 ELYASKHAN has built a reputation as one of the most unique vocalists and songwriters in music today. A powerhouse on stage, “taking the spiritual and making it gleefully profane”, with a voice like “melted fucking chocolate over bourbon”, Khan draws influences from his UK-Indian heritage and his creative upbringing in NYC art and music scene to create a dark, sensuous mass of sound, invoking a post punk, Led Zeppelin, electro / folk / funk / urban / nomadic freak-out!