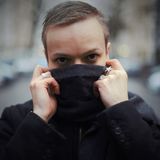 Never miss another
show from Exildiscount

Drew alias Exildiscount is a composer, sound artist, producer and DJ from Berlin. Whether it is in working alongside performance or video artists or in compiling a techno set, Drew’s work always operates along the same tenets: exploring, challenging and recontextualising the different narratives, disciplines, identities, perspectives and discourses that inform both a work itself as much as our understanding of it. In this, he draws on his formal training as much his biography. Born to Christian cultist parents, he spent his childhood playing music in pedestrian malls of Germany with his family band.
Drew started out DJing in 2003 and has since been playing at parties across the queer scene of Berlin, such as Chantals House of Shame, Gegen and as a longtime resident at SchwuZ. His work is driven by a belief in idealism rather than ideologies.