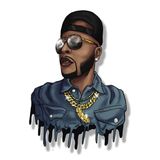 Never miss another
show from DraMatiQue

DraMatiQue - The Burn Mixtape { Hosted by DJ Smoke }
by DraMatiQue

Originally introduced to the hip-hop/rap genre at a relatively young age , DraMatiQue began writing and performing songs in high school.
With a solid catalog of music continues to receive rave reviews across the nation including a feature in THE SOURCE magazine, a coveted spot in urb.com’s NEXT 1000 listing, a profile as Gotv.com’s HIP HOP OFFICIAL artist of the week and a radio interview on the L.A. WAKE UP SHOW ( Power 106FM ) with Sway and Tec.