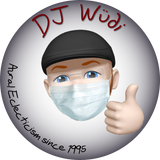 Onetime alt/goth/electronica/industrial DJ from Anchorage, Alaska in the mid- to late-1990s (primarily at The Lost Abbey and Gig's Music Theater), now spinning from home.

Note: My mixes are unashamedly imperfect. Most of the time I don't practice them before recording, and I rarely even plan which songs I'll play or at what point in the mix. Rather, I prefer the "on the fly" approach I took during my club DJ days, when it was all about who was in the club, who was on the dance floor, and what requests I was getting. Admittedly, it's a little harder when I'm at home, don't have a floor to read, and have no requests lined up, but an improvisational approach is still more my style. So, expect the occasional odd transition and minor trainwreck — the kind of thing that happens to any DJ and might not even get noticed in the midst of a night out dancing at a club, but can stick out a bit more when simply listening straight through.