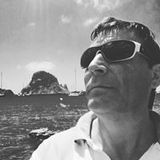 THE SHOW WILL BEGIN IN 15 SECONDS
by Dj Si Carvell

Si Carvell
Widely knowledged for being one of the flag bearers of vinyl, Si Carvell has performed from some of the most prestigious DJ booths in Europe.
Si Carvell has the unique ability to transfix crowds large and small with his freestyle mix of multi genre house.
Born in Southend on Sea in Essex 1970, Si was recorded his own sets onto cassette at the tender age of 7 via two Sony turntables before his international recognition.
The journey began, not with House Music, but with anything from Motown and Soul to Disco and Funk.
When Si discovered House Music, he couldnt wait to drop it into his sets at venues and events accross North Manchester that included being invited to play at Nebula Acid House Rave in 1989.
Si spent 5 summers Living in Ibiza in the mid 90ss and has played alongside some of the greatest DJ's in the world at venues that include Es-Paradis. This was a major turning point in his career meeting some of his piers and channeling the next part of his magical journey.