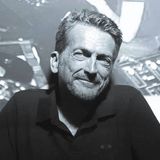 A bona fide legend in the Music Industry, DJ/Remixer/Producer Robbie Leslie has been performing on the international circuit for 40 years.
One of the First Generation DJs, Leslie started his career on Fire Island at the Sandpiper (now the Pavilion) in 1975… an auspicious beginning. From there he moved on to New York City, where the list of clubs at which he regularly performed reads like a ‘Who's Who’ of Big Apple nightspots: The Saint (and subsequently the Saint-At-Large), Studio 54, Underground, Private Eyes, Palladium, the Red Parrot, 12 West and the Ice Palace.
Recent gigs include clubs in Dubai, Budapest, Berlin, Moscow, Sydney, Copenhagen, Stockholm, Toronto, St. Maarten, Punta Cana, and San Juan. Other notable residencies include the Copa of Fort Lauderdale and Key West and Twist in South Beach.
Robbie can now be found on the airwaves with his weekly SiriusXM Satellite Radio broadcast of "Robbie Leslie Presents". Fridays at 9PM Eastern, 6PM Pacific in North America.