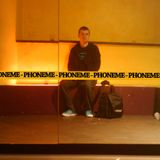 DJ Phoneme, in business since 2003, has delighted audiences in many cities, with appearances on a large number of festivals and parties of its kind in Romania and abroad (Netherlands, Italy, Bulgaria).
He's known for a sound full of energy and without
compromise, mixing breakbeat and dubstep, to jungle and drum & bass. In 2008 and 2009 he hosted a weekly show on BreaksFM radio (UK), and his mixes were broadcasted by radios like iBreaks, Digitally Imported, PlayFM or A-Plus.
Phoneme was, and is, involved in many projects (Koalition Crew, Bass Request, Sub:Comtrol)), and in 2008 was a DJ for breakbeat label
Scarcity Records, founded by renowned local producer Mesmer. In 2010 he decided to deal exclusively with the sound preferred by establishing own label, Hibrid Records.