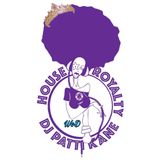 Owner of DJ Patti Kane House Royalty and owner/operator of Women on Decks.
DJ Patti Kane began studying music at age 6 and realized that that she liked classical music but needed more. After searching a different path and hit the underground scene....HARD. Finding Larry Levan at the New York's legendary Paradise Garage, she knew she had found the perfect "husband"!!! Not long after, she began began taking lessons with Deep Master Ryan (World Paradise). "I will never forget Barbara Tucker's I Get Lifted Duck Beats." I have a very strong support system. There are so many people in my corner. DJ Sal and DMR are my roots. They don't let me get lazy, EVER!!! LOL. OH MAN, my sister's speech (with her finger pointed at me) before I play anywhere: "Now listen!! Don't go out there acting all scared. You better do what you do! No acting punk allowed and I better be tired from dancing when it's over".

"I love how I feel when I play and I want to share that utopia with anyone listening."