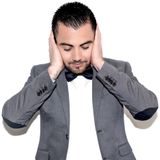 Self made DJ 100 % made in Saint-Tropez, DJ NIKO SAINT TROPEZ is resident of one of the most exclusive places of the Tropezian nights, LE QUAI SAINT TROPEZ.
DJ NIKO SAINT TROPEZ quickly stood out on the the stage of the Dj's from the french riviera by his musical culture mainly inspired by the Soul, by the Funk, and by the house music. In the style of a real Chameleon, he will be able to transform the color of his set according to the place, to the dancefloor, or to the event of which he will be a member.