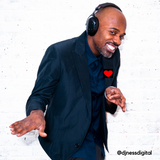 Growing up, Nessdigital always wanted to play the sax and the piano
because he wanted to be like two of his favorite jazz musicians, John
Coltrane and Thelonious Monk. Although he never learned to play either instrument, he did the next best thing...He became a Dj!

This all came about quite accidentally back when he was promoting an event at The Sugar Shack in Harlem. That night, the deejay he had booked, had canceled at the last minute, and not knowing what to do, Nessdigital was left scrambling for a replacement. He called every Dj he knew but no one was available.

Upset and worried, Nessdigital contacted another buddy promoter to see if they might be able to offer any assistance and that's when he struck gold. His friend brilliantly suggested connecting his laptop (loaded with Napster tunes) into the venue's house system. He tried that, and somehow, it miraculously worked, and so I was born.