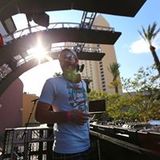 No Ex'SEPT'tions
by DJ Nel Official

Took A Minute But We Got There
by DJ Nel Official

Unmatched stage presence, with a side of infinite energy. Now based out of Long Beach, California, DJ Nel is one of the premier open format talents.

With experience in the entertainment industry from nothing but the best, DJ Nel continues to rock from large stage performances, to private/corporate events. He goes by a simple three word mantra that can easily be displayed at every appearance.