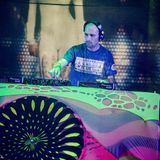 Misha Myst - dj, party organizer, producer - head of Shanti Sound Sytem, the oldest promo in St.Petersburg to organize goa & psytrance events since 1998 till now.
One of the first Russian djs performing in Goa since 1999/2000 season. Resident at trance dancefloor on Kazantip festival from 1998.
He discovered electronic dance music in the end of the 80’s from the first underground squat parties, which were, actually, the very beginning of the Russian electronic dance scene.