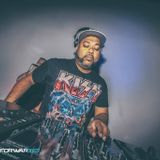 Mr. Brown has been in the game over 20 years and is a well-respected member of the Toronto Drum n Bass community. Originally playing ska, reggae, and house for the first 8 years then made the transition to dnb; but this early music preference is still transmitted through his sets today. In 2002 he started a production company known as Soul In Motion that throw events that promote the best local and international DnB producers and DJ’s around. Mr. Brown isn’t just local to Toronto, as he’s played all over Canada, the US as well the UK. Not to mention, he’s been played alongside talent such as: Netsky, Sigma, Brookes Brothers, Shy FX, Fabio, Andy C, and Break just to name a few. Currently, aside from working on a series of side promotional projects; Junglist Movement and Heavyweight Productions, he is a rotating host on Canada’s longest running DnB radio show “The Prophecy. Mr. Brown’s high energy behind the decks are pure crowd pleasers and he has no sign of stopping anytime soon