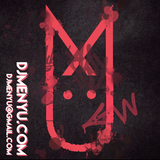 Born and raised in the South Bronx, Menyu was surrounded by the rise of the Hip Hop Movement (DJing, Beatboxing, Graffiti, among the 6 major elements of this urban culture). In addition, he also received other musical influences (his mother loved salsa and disco, and his father loved oldies).
At the age of ten, Menyu learned how to DJ in 1985, when he used to sneak in his brother's room and use his boy's equipment (until his mother caught him). After years of working and saving money, he bought his own equipment in 1991, and he's been DJing ever since. He officially started DJing with House music, but HIP HOP was always in his blood. Through positive influences, including his brother, 90s Rapper, Puz'l (aka- Mysterme), he started producing.
So far, Menyu has DJed at many locations in NYC (and a music store in Florida).