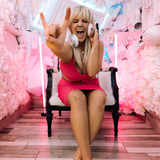 Never miss another
show from djkellyhooper

With over 15+ years in the wedding and corporate industry, DJ Kelly Hooper is your go-to for professional, fun, interactive, and creative DJ services! Kelly has appeared on multiple episodes of Real Housewives of Dallas, has opened for legendary acts such as Mary J. Blige and Sting, and has performed for many other influential personalities. Kelly is also an entertainer for the DFW Live Nation VIP Lounge venues at Dos Equis Pavillion, Toyota Music Factory, as well as the newly opened, Echo Lounge. She has provided her DJ entertainment for the pre and after party at those venues for acts such as: Maroon 5, Korn, Alanis Morrissette, Garbage, Slipknot, and Rufus De Sol.