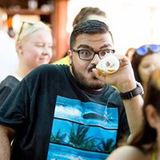 After playing at most of the big name venues in the Aruban night life scene, DJ Kash moved to The Netherlands in the summer of 2012.
After moving to the Netherlands, he was welcomed with open arms and was directly booked to play at various events.

The best way to describe Kash’s music style is the combination of House, Moombahton, Trap, Urban, Hiphop, Kuduro and Uptempo with an extra focus on the first 3 genres mentioned. (EDM)

What makes DJ Kash different from the rest is his ability to switch over from genres without any hesitation as well as his exclusive edits that he likes to play in his sets and watch an unexpecting crowd bounce to the beat.
In May of 2013, DJ Kash released his first monthly podcast series: “GET DOWN with DJ Kash”.