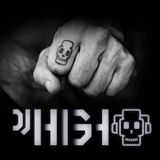 This adventure starts in the 90's. Since the first days strongly involved with ambient music and event production, Paulo Dias aka dj high was Boom Festival ambient area "headman" from 98 until 2012.

Co-founder of the mythical Dreamlab - chill out or die!, melts in his sets a huge variety of styles and likes to be seen as a free style dj.