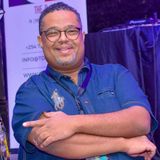 Never miss another
show from djdrazen

In Kenya there are very few DJs who live up to their reputations as industry professionals. One of the few is Kenyan Dance Music industry pioneer, Dj Drazen

His non-stop efforts in promoting one of Africa’s rising entertainment industries make him a must-have on any DJ line up.
Drazen began his career in the late 90’s at Pavement Night Club, which was Nairobi premier night club back then. He then set up 6:AM Entertainment.
The company took off under Drazen’s wing and has enjoyed massive success as Kenya’s number one Dance Music event organising firm.