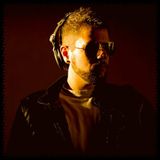 Dj Danthrax fell in love with dj’ing well over a decade ago and he’s been doing it ever since, bringing you some of his favorite house, dance and electronic music, and anything else with groovy beat.