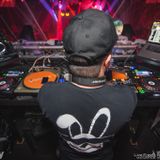 For over a decade, Damien Paul built his name as a trusted selector and tastemaker with his signature sound of dark, driving, and gritty dance music. From dimly-lit warehouses to festival stages, Damien draws musically from his rave-inspired roots, crossing genres to entrance his audiences and bring them on unique (and often strange) journeys.

Damien held a long-standing position as a resident DJ of the legendary RISE after-hours night club, helping them earn the title of DJ Mag's 2012 #42 ranked club in the world. He was also the recipient of a Boston Magazine "2012 Best of Boston Award" for his residency at Good Life.

His command of the dancefloor was earned as a seasoned opener, highlighted by his sets supporting world-class talent including Jay Lumen, John Dahlback, Drumcell, the Scumfrog, and Danny Daze. His sounds have been showcased on festival stages such as Identity Festival, Fractalfest, Hydrotechnics Festival, Firefly Arts Collective, Figment Boston, and the Together.