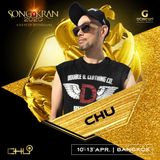 DJ CHU* , who celebrates its 20th anniversary this year. With exceptional musical style and personality, he continues to explore his own unique groove, “The CHU*’s world”. By his overflowing with love, he has gained prominence and overwhelming support from party people. In 2019, he is booked to the big party, Song Kran (Bangkok)  the second time. He had played as the resident dj,“Shangri-La”@ ageHa (Tokyo) .And now, he plays vigorously around the Asia, Korea, Hong-Kong, Taipei, Beijing, Shanghai and more. Having started work as a producer as well, we can look forward to an evolution of the “The CHU*’s WORLD”!