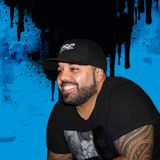 In The Gym Podcast - Episode 68
by DJ CASE

CASE, a party rocker in the Boston nightlife scene, is an open-format DJ with a passion for music and entertainment, and he is known to incorporate live blends, scratching, and MC’ing into his performances. CASE, who is also a mix show DJ on Boston's 103.3 AMP Radio (WODS), and on NYC’s Party 105.3 FM (WPTY), holds residencies at luxury venues and premier nightclubs throughout the Boston area, and he is highly recognized for featuring the latest and greatest in Top-40, House, Hip-Hop, Mashups, Rock, 80’s, 90’s, and classic party anthems in his routines. He was, and still is, influenced by the works of DJs like DJ AM, VICE, and A-Trak.

For more information on how to connect with CASE for future performances and projects, logon to djcaseonline.net. Also, be sure to follow him on Facebook and Instagram under @djcaseboston and on Twitter under @djcase