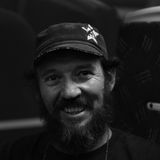 Never miss another
show from djbob206

DJ Bob bought his first records in 1984. Armed with a cosmic knowledge of Jazz, Funk and African music, this DJ packs a hefty bag of Jazz and Funk vinyl and rare grooves. He was behind the live music venues Mojo’s (1993-4) and then 206 Live (1995-2001) in Joburg and spent 12 years producing the 206 stage at OppiKoppi, where he has been playing records for 23 years. He has practised as an artist manager, agent, event producer and tour manager amongst many other titles. His sets, largely influenced by an early teenage Jazz education in the Free State, range from 70’s Funk and Soul through Acid Jazz to Reggae, Afrobeat, Samba and South African Jazz, Rock and Pop. On top of this Breakbeat and Hip Hop make regular guest appearances.
This well-seasoned timer of the South African music industry continues to surprise dance floors with his eclectic mix of Jazz and Funky tunes.
Find DJ Bob on Facebook https://www.facebook.com/djbob206