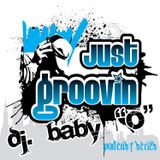 As if growing up in the eighties was not hard enough! Imagine growing up, in the heart and soul of Chicago, the southside. The infamous SOUTHSIDE provided a melting pot of not only cultures but also music. This underground music caught the ear of a very talented and soon to be DJ, which would launch him into a realm that only few have achieved. Baby "O" initiated his devotion to DJ'ing in the mid-eighties in the infancy of house music. Since then, Baby "O" has release countless underground mixtapes also under different monikers to continue building his craft. His diverse and wide-range choice in music has earned him, the respect of not only his listeners but also peers. All while taking risk and playing records others would never play due to the uncertainty in the crowd. Since then he has stamped his quality of blending and passion for the music in every mix. Now with several acclaimed mixtapes in House, Techno, Hi-Energy, Classics and New wave (early 80's post punk, synth-punk) and wi