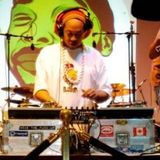 Applejac joined the Universal Zulu Nation Atlanta chapter in 1992, where he would hone his skills playing in front of crowds. It was during a party during Freaknik '92 that he would make his mark playing "crate joints". in 1995, Applejac began to do "exclusive" remixes for WRAS's Sunday night Hip-Hop show, "Rhythm and Vibes", to showcase his production skills. He also helped to develop a segment called "Sample Clearance" where original songs of hip-hop tunes were played and the listeners had to figure out who the original artist was. More often than not, he left the listeners stumped.
The future finds him on the cusp of some pretty major things. He has done remixes for several artists, including Dezaray Dawn’s “Chameleon”, which was just featured in the Ava Duvernay directed short film entitled “The Door” for Miu Miu. In 2011, he released his own pet project, "Playin' Favorites", where he skillfully recrafted soulful covers of some of his favorite artists in his own inimitable way.