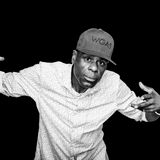 Normski has had a prolific career in Music, TV, Photography, Fashion and Journalism. His TV career kicked off in 1991 when he became Britain's foremost youth presenter on ‘DANCE ENERGY' for Def II on BBC 2. In 1995 he moved to Channel 4 to launch "BOARD STUPID" the first ever Snowboard show on British TV. As a radio broadcaster, his credits include "Dance Energy Radio Show" on Radio 1, " Rap Academy" on Kiss FM and "VIBE" on BBC Radio 5. Plus underground dance music shows on invincible radio, House FM, Push FM, Co presented "House Sexy" with Nick 'Bodyrox' Bridges on Ministry of Sound radio and currently is the voice of the www.Internationalradiofestival.com and The Music Mondays on FLEX 101.4FM. He has hosted a number of live events , including the Jazz stage at the Phoenix festival in 1995/96/97, the Sony stage at the BBC Big Bash, The main stage at Lovebox 2005, The Pepsi Max Mania Extreme sports event, Redbull Big Air competitions. He has DJ'd in clubs all over the UK and Europe.