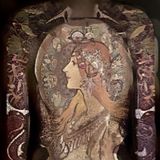 Summer 89, Nadja falls in love with what was called Acid Music in a illegal rave party on a beach near tel aviv. Since then she became a rave warrior in France, learned djing on technics and produced a bit on cubase in the early 90'. Her parents forced her to quit all this shit for serious studies... Eventually she post graduated, and became a scriptwriter. That's why Rave culture and storytelling are the major components of her music. Her sound : mental, soulful, groovy and... boobsy ! https://www.facebook.com/djNadja