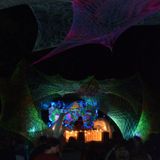 Charles Charfield, aka DJ Chuckles, has been DJ-ing on and of since a few years and hails from the great city of Gent, Belgium, which is rich in artistic and musical culture. Having spent over 10 years raving the globe, Chuckles refined his skills and ability to play many styles of psychedelic dance music. In 2009, he co-founded Lost Theory Records with some equally dedicated people to spread the music we love so much! Depending on the time table and the theme of the party, you can expect different sound esthetics, varying from “organic forest Scandinavian style” but lately focusing more on "Zenonesque" or "electronic futuristic minimal organic psytrance techno". Favourite time to play: Long! Opening set or closing or never ending after-party sets. To create a story, a DJ needs time!