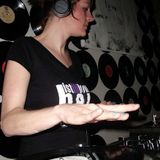 Never miss another
show from bumblebeednb

Born and raised in Chicago and now residing in Berlin Germany, Bumblebees' passion for DNB and Jungle music is the driving force in her everyday life.
She has played in various cities around the USA including Chicago, New York, Cleveland, and Milwaukee. International she's played in Berlin, Milan, Lisbon, and Amsterdam. Bumblebee also hosts The hive on Bassdrive.com on Sundays from 16:00 - 18:00 CEST.

Currently, she is part of the DNBID crew in Chicago and her past affiliations have been with crews such as Tree House Collective, Voodoo Child, Unknown Soldiers, and Planet Detroit. She has played at clubs such as Big Wig, Lava Lounge, Cafe Lura, Smart Bar, The Exit, The Funky Buddha in Cleveland. International at Club Gretchen, Rosi's, Subland, Magdalena, Weisse Hasse, Cassiopeia, and countless other house parties, raves, and open airs.