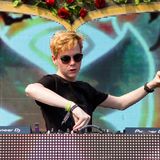 Never miss another
show from DIVS

DIVS is a young Belgian DJ and producer with a passion for various kinds of music. He started taking classical music lesson at the age of 9 and started playing the piano one year later. At the age of 11 he started learning to DJ and soon after producing his own music.
Early 2016 he had his first “club” experience in Carré and in june 2016 he performed at the popular You’rin kids festival. He returned to You'rin 2017 and shared the stage with MC Chucky and Jebroer.
His first release “Thrilling Voices” came out on July 6th 2017 on the Smile Creations Music Label, making him at the age of 14, one of the youngest DJ/Producers in Belgium. During the Tomorrowland neighboursparty 2017, DIVS played 2 sets in "The House of Masks" and "The Rose Garden" and is probably the youngest DJ to perform on a Tomorrowland stage.
He prefers to play various EDM styles including future house, future bounce and progressive house. But DIVS will adopt to the crowd and give them a great experience!