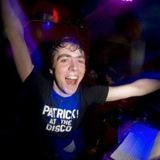 These were the words I saw written on a massive banner at Fabric one night back in the early noughties. "Yes", I thought - it's not about being too cool to dance... it's about having fun. This is the philosophy I have taken with me throughout my clubbing career, and I reckon it's lead me in the right directions.

Since becoming a DJ in 2002, I've stayed pretty low-key as far as the scene is concerned, but that's not to say I haven't played a few pretty awesome sets. I started out playing breaks - which was the up-and-coming thing back then - and over the years have expanded my musical tastes back into the past, and up to the present, in a wide range of genres.

My biggest affiliation would have to be Planet Angel, where I played my first "proper" gig, and whose 10th anniversary party I played at in 2009. I've also had stints with NSB Radio, Synergy Project, Club Knowwhere, Courier DJs, Loop, and more recently TooUp Soundsystem.