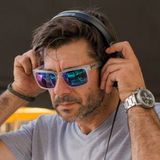 Mozambican born Dino Moran established his name and professional career when creating the famous E.S.P day time roof top sessions in the early 90’s, and has since then held his position as one of Africa’s most internationally influential and respected DJ’s.

A true globetrotter, He has headlined clubs and festivals in 38 countries playing his trademark Afrofusion Techno sound

Some career highlights are...

-He has performed for 39 of the worlds presidents including being invited to play at Nelson Mandela’s Birthday and Xmas parties.

- First African DJ to perform on Pete Tongs Essential mix and he also featured live on The BBC Radio 1 Global Millennium broadcast listened to by over 10 Million People,