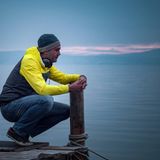 Dim K (Dimitrios Kostaras) was born in the Greek city of Corinth.
His fascination with electronic music began in 1995 with styles such as break beat, drum & bass, psychedelic trance,techno, ambient & house, and finally led to DJ'ing.
He played several years on a local radio station and some events.
Now he is making mixes in the style of progressive house and believes that every mix is an another journey every time.
He did his first appearance after all these years as a guest at the radioshow Lifelines on People Say Fm & as a guest at radioshow Ocean Planet on Pure.FM & as a guest at radioshow Headlands on Pure.FM and he also played at Innervisions Radio and he is still making mixes.
Since 2013 he is host at the monthly radioshow 'Progressive Stories' on Pure.Fm with Jose Tabarez.
Also since 2014 he has his monthly radioshow 'Dim K Sessions' on Nube-Music.com
Links:
http://soundcloud.com/dim-k-1
https://www.facebook.com/dimitris.kwstaras