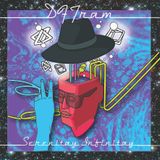 Support DF Tram by subscribing directly to this channel and get access to exclusive rewards.

DF Tram is an enigmatic dj and producer from San Francisco who is highly regarded in the North American electronic music scene. Known for his unique style of mixing and producing, his chill dj sets are second to none as far as innovation is concerned. Catch his weird and wonderful sound at one of his regular gigs in the bay area, or in clubs and festivals around the world. DF Tram has played at some of the best events in the world such as “glastonbury”, “the big chill” festival , "Niceto" in (buenos aires, argentina), ”chillits” (sf) and many more. He was nominated for a dj award in the downtempo/eclectic category at the ibiza dj awards 2008. He has supported Dengue Fever, and was the opening DJ for The Orb on their recent 30th anniversary tour. In 2018 he released his album "Serenitay Infinitay" on the highly acclaimed liquid sound design label...which includes remixes by the orb and the irresistible force..... booking :artistoperations@gmail.com