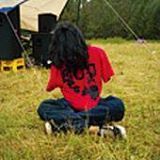 destr∞y a.k.a. dubdub
He’s cofounder of Ikanani mothzzzzrrr fukerrrr sound system and with these crew got involved in the Japanese underground free party & local teknival scene. At some point destrooy moved to Europe, to join the free party scene, and since then he consistently got involved in the squat party, street party, teknivals and all kinds of underground art. Joining different sound systems and traveling all around Europe playing live sets, spinning records, helping to carry the speakers and continually involved in these autonomous happening of freedom. In the same time he discovered also the free improvisation scene of Europe, and been touring with different artists from the underground experimental and noise music scene. as open session, open deck free improvisation SEWAGE/OPENCLOSE. An output of the multidimensional activity project Refugges on Dance Floor. He have released LPs by label ikanani x corehead.