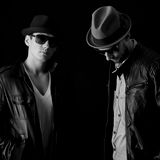 Never miss another
show from delarocadjs

For 15 years, the name De La Roca Deejays has been a name spoken with respect in various Nightclubs across Europe. Both coming from musical families; it was a natural progression for these two aspiring talents to follow their rhythmic roots. Growing up in the influential time when Hip Hop music began making its impression, the De La Roca Deejays took their first steps onto the scene performing in local events and youth centers in southern Germany. In 1998 they joined forces to form the De La Roca Deejays focusing on both the National and International Club scene.

With beginnings in popular German cities like; Stuttgart, Munich, Frankfurt, Cologne and Berlin, the De La Roca Deejays quickly became synonymous with greatness and acquired a reputation for themselves that is just as comparable. As a result of their efforts their name quickly spread and bookings began to come from exclusive Hotspots across Europe such as, Zurich, Geneva, Milan, Paris, St.Tropez and London to name a few.