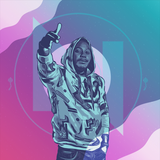 At the age of 12 he fell in love with radio and determined to make
the medium and its environment his playground
by practicing on a set of decks his uncle owned.
He got his first gig at the age of 18 and rubbed shoulders with industry heavy weights
this has propelled him to be one of the most young and talented millennia DJs from Kenya!
Fast forward to present, He has officially conquered the Nairobi, Kampala, Bujumbura,
and Kigali club scenes
and with an East African tour he is gradually becoming a house hold name.
His international breakthrough has seen him headline alongside chris brown, wizkid, Ice Prince,
Davido, Lira (SA), Victoria Kimani, dj maphorisa,, silver star from uk, dj spynfo from new york
Jason Derulo and Beenie man