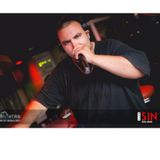 Kindez has been rocking the UK airwaves from the age of 15 years old. Started off as a Grime MC on the mighty Sub Jam FM before moving on to Raw Flex FM where his career grew and he started to receive some real recognition for his talents. He then went on to take over and run Sweet FM where he truly became the DJ he is today. Holding down a 10am-1pm show, 5 days a week for 3years his name just got bigger and bigger! Not only has he come along way by becoming a recognised face in the underground radio scene, Kindez has also supported many big names during their UK tours, these include: DMX, Jon B, Ginuwine, Donnell Jones and of course USG. For the last 11 years he has spent 6 months of the year being Ayia Napa’s favourite DJ being resident in the famous Castle Club and Club Sin, also not forgetting The Bell Bar and Aruba Cocktail Bar. In 2013 Kindez joined the USG roster officially, having seen this DJ talent rock clubs for years and being a USG fan himself, it was only right the direct