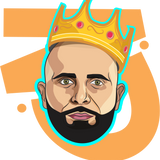 PRONOUNCED "Kah-Leet", short for "Carlito"...Philadelphia born and NJ raised Carlos Rodriguez started his addiction to the art of DJing at the young age of 12. Tagging along with his older cousin, who was also a DJ, he became familiar with music. Unable to afford his own DJ equipment, Calyte perfected his mixing skills practicing long hours in his room in a most unconventional way…with two boom boxes and no mixer. Juggling between the play button and the pause button, he would train his ear to match the beats per minute (BPMs). Calyte would even do his grade school dances with his “mixerless” setup. Once old enough, he got his hands on his first DJ setup. Throughout high school, Calyte was known for doing house parties, skating rinks, sweet 16's, and school dances. Calyte’s ability to “speak with his hands” started to get its recognition; Founder -SupremeDJs; Member -SenateDJs; Member -MP3Waxx.com; Reloop.com Artist.