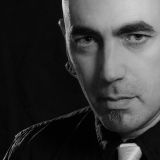 DJ Sandman, with a career longer than 20 years, is, without any doubt, the DJ with more experience in the Dark Scene in Barcelona.
He has worked for some of the most important clubs, like "La Nit" at the end of the 80's, the mythical "Toque BCN" in its first steps, "In-D" and "Hands Games", several sessions in some disco's in Zaragoza, Madrid and for sure Barcelona improve his hard and long career.
Recently everybody remembers him as DJ Sandman at "Sanctuary Electro Gothic Club", during 4 years he was at the front of the disco.
He deejayed one session at the Nachtwerk Musik Club in Karlsruhe (Germany) in 2006 and the Wave Gotik Treffen festival in the edition of 2008 in the Moritzbastei.
From 2005 to 2009 Dj Sandman has also had a monthly residency at the 666 club in Madrid. Resident DJ of the club Demonix from 2007 to 2011.
Currently has a monthly party called Transmission in the Antibiotic Bar dedicated to post-punk, cold wave, minimal wave, New New Wave...