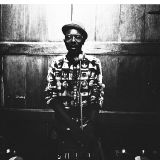 FRESH NUNAS is as fresh as it gets in every sense of the word. Straight up from the 80's Mozambican funkadelic culture, he started up his music journey recording and producing Hiphop in the late 90’s. Years later, he officially started Dj’ing at friends parties when Cds where still a ting. In 2003, he move to NYC to study graphic design and officially started to spin vinyl in Soho, where he establish his brand name FRESH NUNAS. He became known in NY for playing afrobeat, salsa, world music, funk, house, samba, dub and fresh interpretations of drums.