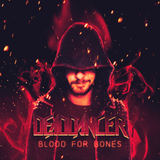 Never miss another
show from DeadDancer

DeadDancer's main styles and sounds could be described as Alternative, EDM, Hard Dance, Industrial, Metal, Electro House, Trance and Drum n' Bass, however, if he's got a track that he knows will smash it but it doesn't conform to a night's music policy, there will be no hesitations and it will be dropped!

A few notable events DeadDancer has performed at: