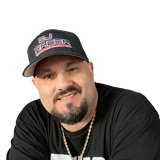 Growing up in Spanish Harlem New York, Founder and Owner of DJ RaceR Entertainment, Carlos Rodriguez's passion for music led him to become a DJ at an early age. Carlos's favorite music was Hip Hop, House, and Latin Freestyle. His taste in music evolved and expanded his interest to various genres such as Disco, Funk, Electronic, 90's R&B, Cumbia, and Merengue.
As life went on, Carlos moved out of Harlem to Sunny Southern California. He has called Los Angeles his home for the last 25 years. While reaching back to his roots and integrating his modern-day electric taste, he founded DJ Racer Entertainment to bring the best DJ experience possible.