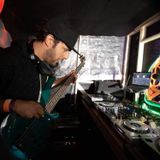 Wally is an electronic music DJ/Producer from Montreal, Canada. Mixing since 2003, producing since 2008, his mission is to break barriers between genres and promote new sounds and presenting them in original ways.

He has taken part in organizing the first dubstep oriented weekly in Montreal, establishing a firm base which helped pioneer a now thriving scene. Forward music Montreal has seen a wide-range of artists over it's three years of existance including, Synkro, King Cannibal, Deekline, JFB, Submerse, Von D, Plastician, DZ and Spor to name a few.